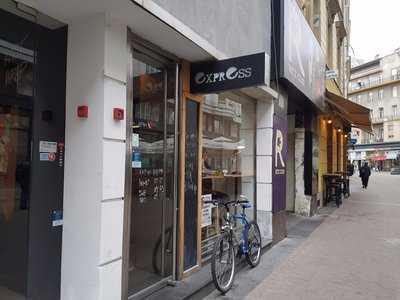 Thanks for the suggestion

Find the best restaurant in Zagreb

Read the reviews on

Madelaine Thomas
+5
By far the best coffee spot in Zagreb! Awesome brews, with staff that are meticulous about sending out the best cups of joe (sans the typical barista snobbery though). It basically became my second home as It felt like a little bit of Australia in a very foreign and new city.. keep smashing out those banging Flat Whites guys! I’m already missing them.

Ivan Krnic
+5
By far top coffee place in Zagreb ... I don't know how to describe the decor but I do know that every ingredient that they use for a cup of coffee is best possible, and currated by a perfectionist (from trained barista, to the cup, the grinder, the espresso machine, and of course the bean).

Compare the best restaurants near Express

Our aggregate rating, “Sluurpometro”, is 95 based on 500 parameters and reviews

An error has occurred! Please try again in a few minutes

Would you recommend this place?